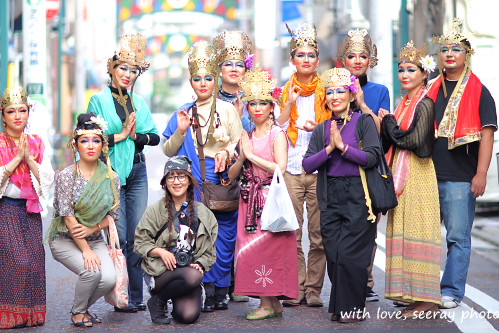 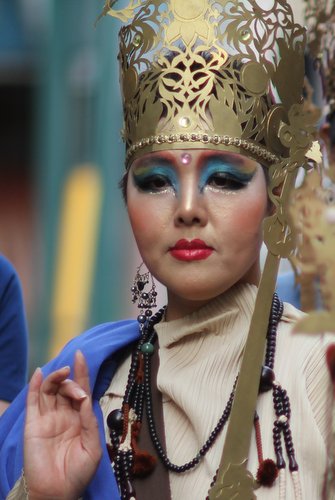 By ERIKO ARITA
Staff Writer
Eleven bodhisattvas stand in formation, their heads crowned and their almond-shaped eyes and faces dusted with gold.


Eye-stopping: A symmetrical image of a volunteer bodhisattva created after artist Tetta's making-up by flipping one side of a photo of her face to form the other side. © TETTA
The scene could be a reenactment of a painting, or a sculpture in a Buddhist temple or museum. But it's not. It's a scene beheld one recent Sunday afternoon at the shopping center in Yokohama's Noge district ― and the potential Buddhas are in reality just regular Earthlings.

For the last two years, a Japanese artist named Tetta has been working to re-create the 1,000 more than 800-year-old bodhisattva statues in the Sanjusangendo Hall at Rengeoin Temple in Kyoto using people made up and dressed appropriately ― and that sunny Sunday she'd brought her workshop to Noge, where 11 volunteers awaited her. "Bodhisattvas are those who are undergoing ascetic training to attain spiritual enlightenment," explained Tetta, of those frequent subjects of Buddhist art and sculpture. She said some people who have taken part in her workshops have described experiencing "instant enlightenment."

"Spending hours for the makeup and then walking around the streets with the embarrassing stuff on" is akin to ascetic training, Tetta mooted.

The 29-year-old artist based in Kanagawa Prefecture asked the 11 participants, including a university friend and that friend's friends at a Yokohama samba school, to meet in a municipal facility in Noge for a workshop on Buddha statues and how to make themselves look like bodhisattvas.

The mortal crew's transformation to near-Buddhahood began with Tetta giving a lecture on four kinds of Buddhist statues ― including ones of Tathagata (Nyorai in Japanese), who achieved enlightenment, and bodhisattvas (bosatsu), who are humans on the brink of attaining enlightenment. Tetta explained that each of the 1,000 bodhisattvas in Sanjusangendo Hall in Kyoto has a different face, so her plan is to help 1,000 people to transform themselves into bodhisattva lookalikes, then to photograph them and exhibit the pictures in Sanjusangendo-like lines in the future.

"Today, I want each of you to become one of the 1,000 bodhisattvas," Tetta declared, adding that so far she has taken pictures of 853 people made up to look the part.


Transformed beings: A group of 11 of artist Tetta's bodhisattvas pose in the street in Noge, Yokohama. Tetta aims to recreate in an artwork the famed 1,000 bodhisattva statues in the Sanjusangendo Hall of Rengeoin Temple in Kyoto. © TETTA
After finishing her lecture illustrated with slides, Tetta showed the group how to start their transformations by painting base cream and powdery foundation on the face of one of their group, a man named Kenji Suzuki.

Suzuki said he joined in because he had seen "The March of Human Bodhisattvas," an installation-like event organized by Tetta and performed at the Yokohama Triennale last October. "I am interested in Buddhism, but I also thought this workshop would be a rare chance to 'become' Buddha," said the 48-year-old welder.

Next, still using Suzuki as a model, Tetta showed how to apply thick eyeliner around the eyes and then paint in the space between the lines and his eyes in black.

"You need to do your makeup so your eyes look three times bigger than your own," Tetta said, pointing out that bodhisattvas' faces are strikingly three-dimensional.

Then it was time for the audience to act on their own and go for those big, big eyes. First, they had to apply heavy black eyeliner, then an outer wide swath of eye shadow in whatever favorite color they chose ― whether green, pink, blue, purple or whatever.

Susumu Fushimi, meanwhile, said it was his first time to use makeup. "But it's fun having a makeover and I want to do it again," he said ― while struggling valiantly to daub himself in just the right places.

But Tetta and some of the women would-be bodhisattvas spotted Fushimi's struggle, and the other male participants' futile efforts to eyeline themselves, and came to their rescue ― so doubtless gaining points for a better reincarnation in the process.

Finally, after 2½ hours of struggle, all 11 members truly had eye-popping eyes ― and the final stage of their transformation was upon them. Tetta showed them how to realize their cosmic goal, brushing golden powder on Suzuki's face to cheers from the rest of the group. "You look divine! I feel like I want to worship you," they said.

To top off their transformations, the golden-hued, big-eyed humans then donned golden paper crowns, swathed themselves in robes, and ― good heavens ! ― there they were: Yokohama bodhisattvas.

Tetta then took everyone's picture for her art project and explained how, for the Sanjusangendo montage images, she would use software to flip the left side of the faces over the right side, too, so that the finished countenances were ― unlike almost all humans' faces ― perfectly symmetrical.

"The faces of the bodhisattva statues are symmetrical, though humans' are not," Tetta said. "By composing symmetrical faces, even humans look divine."

For the workshop's grand finale, all 11 participants hit the streets of Noge. This part of the proceedings, Tetta said, was important so that, among the public, her bodhisattvas "could feel they had become different people." The artist also said she of course hoped those only looking on would enjoy her living street-art display.


Old guard: Some of the 1,000 bodhisattva statues in the Sanjusangendo Hall of Rengeoin Temple in Kyoto. WIKI COMMONS
On that occasion, since many of the 11 volunteers were members of a samba music and dance team, parading in public was for them nothing new. Indeed, one of that team, Kimiko Nagasaka, said she felt passersby looked at her and the other bodhisattva cosplayers in a more casual manner than the intent way in which they watched the dancers' every move during a samba parade.

One of those passersby, Binosu Mohan, an Indian employee of an IT company in Tokyo, said he came to Noge to watch a movie with some Indian friends, and was amazed to stumble across a group of Japanese bodhisattvas.

"I am very impressed by them," the Chennai native said, after taking pictures with his mobile phone. "They somehow look like Hindu gods, too."

Meanwhile, Ryota Yamakami, one of the volunteers who works for an event-organizing company, said the workshop had certainly been quite an experience for him.

"I felt like I could see the world in a different way, and I am sure that people on the street saw us as being very different from ordinary people," the 26-year-old said. "I was also attracted by the mysterious beauty of Buddha statues. Their attraction has never faded even after thousands of years."

After walking around Noge for half an hour, and featuring in countless photos, Tetta's doughty dozen-less-one returned to the room from where they'd set out on their roads to enlightenment.

Looking happy as she removed her makeup, Kiyo Furusaki, a staffer at a music magazine, said she really enjoyed the day and had become interested in Tetta's artwork.

Though by her own admission still a whisker or two off a state of enlightenment, she said she would recommend others to join a workshop ― and declared, with wonderment in her eyes: "I feel like I am open and enlightened." 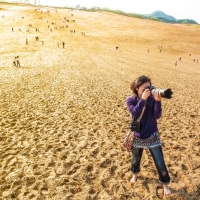